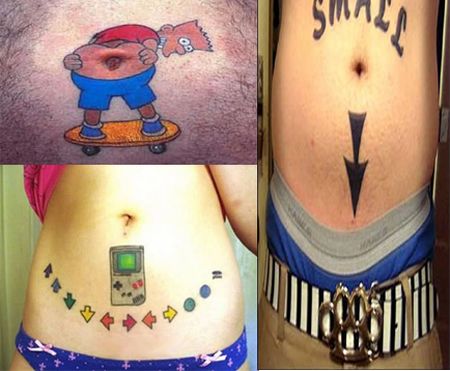 7 Belly button tattoos you would love to hate

Tattoo is now in rage and people find it the most convenient way to sport a nerd, cosmopolitan look. We cannot exempt you to vote for the motif you find cool to be tattooed on your skin. But, the question that remains here is that are you totally free to ink anything you like on our skin? It is perhaps not, at least still when you belong to a civilized society. Look at these worst belly button tattoos that will definitely compel you to think a number of times before you get your body tattooed. We are utterly bewildered what might have struck the brains of these âsuper intelligentâ beings while they were getting themselves tattooed!

No matter how intelligent the guy considers himself to be, we can only call him a dumb. Look at what he has done to his belly button! He inked the cartoon of a NSFW Bart Simpson balloon knot on his belly. We still have surprises for you. This man did another weird thing. His belly button coincided with an asshole. Yuk, this man is simply crazy.

This tattoo demands a chain of explanations. First we will ask, what does this cartoon faced monkey wish to convey? His somersault pose only appears to us that it is perhaps not happy with his own butt and attempts to self fellate. Now, our next question is why it takes such an upside down pose. Does it wish to poo on its own face! What is the significance of the question mark tail? The most burning of all these questions is that is the man crazy to have a meaningless and uncouth tattoo inked on his belly button!

We do not know whether this man is an ardent fan of Popeyes chicken and biscuits or if he is a committed staff of the brand. But whatever he did with his belly button is simply idiotic. He literally transformed himself into a living advertisement of Popeyes! While the owners of the brand will surely have reasons to applaud him, we find him brainless. We are again caught amidst bewilderment as what will he do when his love for the brand ceases to exist!

This man must have created quite a lot of debates among his peers, whether he symbolizes his tools with guns or roses. Even we are confused why are pair of guns aimed at his tools and what is the significance of the roses. Such a tattoo will simply raise questions about this guyâs sexual orientations as well, as it also appears that he hates his tools to the hilt and wishes to shoots it! Oh God, he might be crazy to do such a blunder.

The first reaction majority of the masses will have when they see this horrid belly button tattoo is.âOMG!â. They cannot be blamed as it is definitely a queer idea to transform the belly button into a question mark and the whole belly a gaming ambiance. We do not have reservations against the gaming spree of some youngsters, but the idea of this tattoo is nothing but an idiotic job. So, we enlist it among worst tattoos.

This guy is either crazy or âas honest as the dayâ. Just look at how he is giving out the size of his tool to the world! Donât you think such a job needs either quite a lot of guts or a cranky brain? Letâs not get into the debate which of the clans does this crazy fella belongs, but what he has inked on his belly button is simply idiotic. We do not say honesty is idiotic, but loving the idea of being impotent is surely something to be looked with raised eyebrows. You are definitely going to face steep challenge in getting a girlfriend for you guy!

The artistâs skilled hands definitely need a big clap for the intricacy he showed in creating this multicolored tattoo. But, we can simply give thumbs down for the idea. We can make out that this bulky flesh of lump is a Buddha fan. But it is too much to think that he is so fascinated with Buddha that he calls himself an incarnate! At least that is what we have found from the tattoo all over his fat filled tummy. Look how he has instructed the artist to coincide his belly bottom with that of Buddha! How can a figure 1/100th his size have a belly button a 7â deep belly button as he has! This is undoubtedly the fruit of an idiotic brain.

Shall I get serenity prayer tattoo on...

Where can I get Japanese symbol for...