Home Body Art Guide You think it, I ink it.. 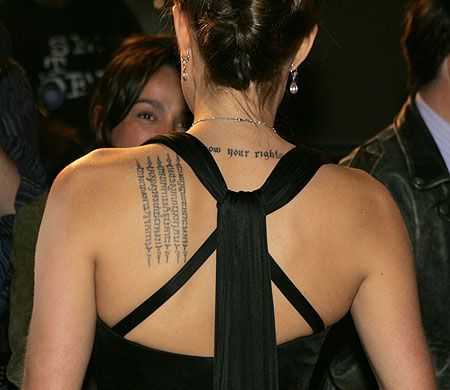 In today’s world, anything that a celebrity does, becomes a fashion statement. This is very much visible through the increasingly popular trend of getting a tattoo inked on your body parts. Several youngsters ape what they see their favorite celebrities doing. There are several well known personalities who have popularized the display of tattoos. Having a tattoo, depicting a name or a figure that a person adores, is one way of expressing affection. Several celebrities have a symbol or a name to show an important person as part of their lives to the rest of the world. Take a look at some famous names adorned with tattoos to display their love and passion.

This super model had ‘Pete’ inked on her wrist, for her ex-husband Peter Andre. She also got a crown made on her wrist, with ‘Princess’ written below the crown, for her daughter. There is one drawback with tattoos though, that is, a tattoo is fairly permanent, and thus needs to be done only after careful thought is given to what the tattoo should depict. She recently visited a tattoo parlor in Ibiza and had ‘Pete’ crossed out.

World famous boxer, Mike Tyson, stated that he had initially thought of having a ‘bunched, small hearts’ made on his face. A friend of his, later suggested the tribal design, which he went along with. Now the tattoo is as famous as the boxer himself.

She has a cross designed on her ankle. She also has an angel on her ankle, and the sign of an ex-flame. Alyssa also got a rosary sign inked prominently on her back.

This reality star has been making headlines in the fashion world. She was spotted with new ink! She was seen with flaunting unique, Asian ideograms inked on her arm and an intricately designed, colorful tattoo on her neck.

This famous actor, also known as “The Rock”, flew all the way to Hawaii to have a Samoan design inked on his left shoulder. He believes this tattoo shows the story of strength, protection and family loyalty that is so important in everyone’s life.

He has several tattoos on his body and feels that tattoos help express feelings. His tattoos include one on his back with the names of his sons.

This actress, who had been nominated for Emmy award, has numerous tattoos all over her body. She also has a lion tattoo on her back. Shortly, she plans to get a bigger one made on her arm.

The addiction guitarist has a tattoo made on his chest as a tribute to his ex-wife. He states that he will not replace it, although they are no longer together.

This Academy award winner has a tattoo made on his head. The actor decided to mark his 40th birthday celebration with some thing to be with him for life. It is an abstract design that has not become very well known in most circles.

This actress sports a unique and awe-inspiring tattoo. It is a double-headed eagle inked on her back. She says that she likes to see it, when she is taking a shower.

This famous player from the New Orleans Saints says that the eagle on his right bicep speaks for itself. He feels proud to be an American and to be able to express anything that he feels, or wants to talk about.

This famous actress has tattoos done on her feet. There is a beautiful small fish made on her ankle. She has also got an ornate flower inked on her foot.

He has more than thirteen tattoos inked all over his body. There is a ‘Lily rose’ over his heart, that’s for his daughter, he says. Then there is a tattoo ‘Betty Sue’ on his bicep for his mother, and also a sparrow named ‘Jack’ for his son.

This famous model renews her nuptial vows with her husband annually. She told the ‘People’ magazine that they got a special tattoo done to mark their fourth wedding anniversary. The tattoo she has inked on her arm, shows her husband’s name and also the names of her three kids.

You think it, I ink it.. was last modified: March 10th, 2015 by Community Writer | Community.Drprem.com