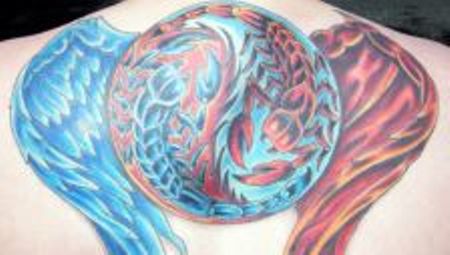 A tattoo is not only just a style statement but also a piece of one’s own self, a symbol through which your personality shines out. Therefore, getting a tattoo needs a lot of thinking and contemplation done before the actual process. For a lot of people, a tattoo reads like a diary that opens up to show a birth sign or a favorite incident of remembrance and more. What is important is that, not only is a tattoo a representation of you to another party but also a reminder etched on the body to remind ourselves of what we believe in.

Good and evil tattoos are not just for the person who is wearing it but is also a popular belief that it brings a universal balance to the soul by sporting one on the body. Good and evil tattoos are based on the universal laws of duality. It is the basic human tendency to distinguish all things to be dually balanced. The universal balance of life is based on the existence of two elements par every power or feeling. Thus such by embracing the duality the soul has accepted what is pure and dirty thus bringing in our morals into the tattoo.

The midst of the tattoo is personalized by the person who is wearing it. Getting a picture or a body image done is very common. The tattoo is then divided into two, good and bad. None is given extra importance or image to cover. The good is usually represented by symbols associated innocence such as, angelic wings, golden halos or baby-like gestures. The evil is represented by the devilâs tail, his fork or other blood red colored items and so on. It is to show how easily we succumb to temptation, greed and the need to race ahead of all.

Good versus evil tattoos may not necessarily be shown by a persona; it can also be shown through objects. For example, getting a fresh red rose crossed with a decayed black one shows good versus evil.

In Indian philosophy, good versus evil is a representation of Karma to show that good deeds lead to good things and evil deeds lead to evil things.