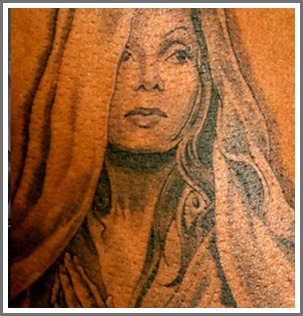 These days, it is like everybody is entitled to do their bit of duty and get a tattoo in the honor of something or someone. This craze hasnât left the celebrities too. They choose tattoos like the designer clothes they plan to strut on red carpets and premiers. But, just like fashion, sometimes the tattoos also backfire. Their skin is like a canvas where the tattoo is sculpted by world class tattoo masters, who simply act according to their clientâs requests. It could be well intentional or could have been spur of the moment or plain stupidity. Well here is a list of top 5 cringe worthy celeb tattoos that brought shame instead of fame to them.

You have the talent to string in talents to make platinum R&B albums. You work with some seriously infamous artists like Mariah Carey, Usher. You have been dating a sensational singer actor for a long period of seven years. What else can go wrong? It could, at the least in one aspect, as it happened in successful music producer Jermaine Dupriâs life. When he had been dating Janet Jackson, he got all mushy and went to a famous tattoo artist and got a angelic form of Janet tattoo scribed on his right side. Boom. They broke up immediately, by some unfortunate coincidence. Now, he has to live with his ex girlfriendâs tattoo, rather than living with her.

Talent and good heart came together as our famous NBA star Shawn Marion. But, he too faced a glitch when he decided to get a Chinese tattoo on one particular ill fated day. Chinese alphabets have to be written accurate. You miss one stroke, it could totally mean something else. When he thought he had been getting a tattoo that declared his nick name âThe Matrixâ in his right leg, he was actually getting the figures of demon, bird and camphor. Not only words change peopleâs images, tattoo needles too.

He is like this hero who comes straight out of a romantic novel, where he is a major sports hunk who falls madly in love with a beauty queen, Posh. They have dream wedding, cute kids and they live happily ever after. Like any hero, he has to do a major blunder and come up and should make everything right. Here, it is his tattoo. The tattoo is a very artful rendition of three chubby little angels lifting Jesus from the tomb, where he says that the three little cherubs are his three sons, who will take care of him later. So, it means he is the one in place of Jesus? It has backfired on him, stirred up controversies. I wonder how the hero can make this right? Hard one to crack, Beckham.

Gucci Mane is the one who drew creative strength every time he was sent to the prison for various charges. When he was out last time, he announced that he is clean for real this time, planned to release an album to show how hard he is as ice and named it âThe Ice Cream Manâ. If you plan to promote your album name, just do it on TV, radio, newspapers, Internet. Why would you go get an ice cream tattoo on your cheek? You really want us to take you seriously, Mr. Mane?

Have you ever wondered why people say one thing, and do the exact opposite thing right away. Why LeBron? Your hometown found you, appreciated you, supported you, hailed you, pampered you and then you picked the opposite team to be in. That too in a much hyped up Television event. To make things worse, you proudly wore the tattoo âLoyaltyâ near your chest, while earning the hatred of your loyal home town fans. Brilliant!