The ancient Egyptian civilization is popular all around the world for their magnificent and awe-inspiring pyramids and their exhibition of numerous symbols for telling their stories and ancient beliefs. Egyptian hieroglyphs include many symbols and drawings of various ancient Egyptian Gods and Goddesses along with many other spiritual symbols. Moreover, besides being easily recognizable, each Egyptian symbol signifies a certain meaning and has its own story. So, before getting any Egyptian symbol tattoos on your skin, make sure you fully understand what it means.

The Ankh symbolizes eternal life and it is similar to a cross of equal arm and a loop on the top instead of the north-pointing arm. The ancient Egyptians strongly believed in afterlife and, according to them, the Ankh was their protector who helped and protected them to fulfill their journey after death. You can draw this cool Ankh tattoo on your ankle, wrist or even on your shoulder.

Ba is a mythical ancient Egyptian bird which represented personality and perseverance. According to legends, Ba helps in preserving a person’s look even after they die. Ba also represented accomplishment of any tasks. You can always relate this decorated bird tattoo with some Egyptian temples or other Egyptian symbol tattoos. 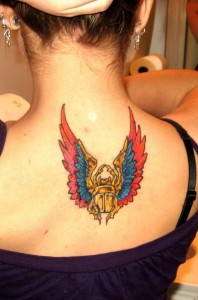 The Scarab represents a dung beetle. It exhibits the character of spontaneity as beetles often roll out of their place whenever they think is appropriate. The Scarab also symbolized rebirth in ancient Egypt and as a tattoo design, it looks awesome on the wrist and neck.

The Egyptian God of sky, Horus lost one of his eyes in a battle and someone else discovered it later. This Eye of Horus, symbolizes the eye which sees everything and also acts as a protector. Getting this Egyptian eye tattoo on the backside of your neck will provide you with a third eye effect.

The Djed resembles the human spine and it represents strength and stable power. The ancient Egyptians used to emblazon the coffins of their loved ones with this symbol in order to provide them with powers to continue their journey after death. If you want to cover your back with a large and unique Egyptian tattoo design then Djed tattoo design is perfect for you. 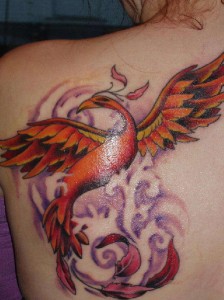 The mythical black bird began a new life by rising from the ashes of his own body and so, it was used as a powerful sign of resurrection in the face of extreme hardships. This Phoenix tattoo design also makes a great upper arm or back tattoo and at the same time, represents the start of a new life. And If you want to start a new life like this Phoenix, as for example you can play this amazing lightning link slots machine, and try to win a huge amount of money. There are too many ways to do it.

On which body part does the live...