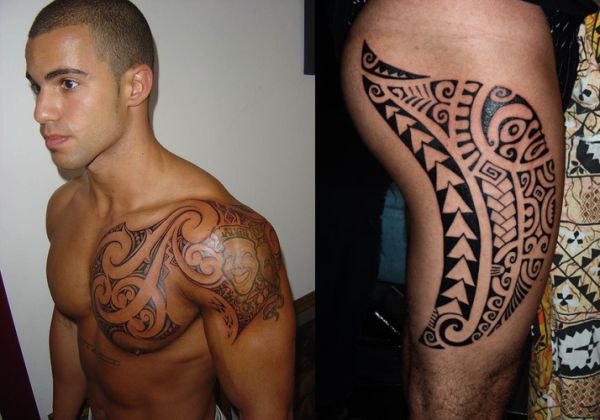 Maori Tattoo designs were inspired by the nature and date back to many centuries ago. They originated from New Zealand and are now popular all over the world. These were based on what the tribal saw around them and how they interacted with the nature. The designs actually form the culture of these tribes. These tattoos embraced spirals, curves and symbols and drew a magnificent piece of art, which represented abstract art forms. At many archeological sites, bones that were used for chiseling the tattoos have been found.

The tribalâs called the process of tattooing as âta mokoâ and the final and finished tattoo was called as moko. Traditionally, they would tattoo their face permanently with these beautiful designs. These designs were chiseled on the skin and not pierced like modern day tattoos. The original Maori tattoos were made only on the members of the community for special occasions like festivals and marriages. For a Maori, the head was the most sacred part of the body and also since it was very visible, most of their tattoos were made on the face and head.

These tattoos acted as initiations at adolescence and went with other rites also as per the Maori traditions. Most of these tattoos were done so that the warriors look attractive to the women when it came to war conquests. They were also used to mark the important events of an individual life. The complete facial tattoo was done only by the tattoo artist who was called as tohunga-ta-oko. This artist would study the face and its bone structure so that he could know the strokes.

Once the tattoo had been made, tradition demanded that the person must be away from food and intimacy so that the skin would heal faster and without infection. Food was given only in the liquid form through a funnel. These tattooing ceremonies were very painful and so in order to sooth down the pain, the others would perform music and poetry recitation. They would also use the leaves of the karaka tree that helps in healing the skin faster.

The entire facial tattoo had many meanings that represented the social status, ancestry, rank and also ferocity and virility. There were 8 components of the male facial tattoo that denoted special aspects of the wearerâs life. Each section was associated with the area of the face and they even had specific names for each section of the face. The forehead at the centre was called as ngakaipikirau which indicated the rank in the tribe. The region around the eyebrows was for the position the individual holds.

The around at the temples were called as uma and indicated 1st and 2nd marriages. The areas around the jaw are called taitoto and indicated the birth status. They even had areas around the eyes and nose and also under the nose. Lack of any of these designs indicated many things and also affected the individualâs life. No tattoo on the forehead means the inheritance or earned rank. Maternal ancestry was on the right side of the face and the left side for paternal ancestry.

The Maori designs have become popular but not the traditional ones. They are liked a lot because of the spirals, the geometrical shapes and the lovely curves. These tattoos are being clubbed with celtic tattoo designs and are very popular. These two art styles complement each other. Although they are not being done on the faces, they are being done on shoulders. These Maori designs have a timeless appeal and of course they use modern techniques to draw them.

Can you please help me with some...

Can you suggest some websites for bird...