Home Off Beat Getting inked: The only way out for Baghdad residents to be identified after death 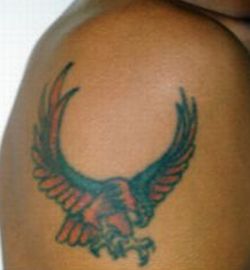 Getting inked: The only way out for Baghdad residents to be identified after death

The popularity of tattoos is growing at an unprecedented rate. In a place like Baghdad, this artistic expression is flourishing. The reason is not fashion it is a lack of personal security. Daily violence, frightening procession of corpses and mutilated bodies that has defined death is forcing people to get inked.

Tattoos are not forbidden in modern Baghdad but they are very much frowned upon. There was a time when men and women got tribal tattoos such as wrist markings or small dots on the chin as a sign of beauty but in recent past tattoos took different role and were worn by people of lower classes and became a way to identify the bodies of prisoners in case they were tortured to death by guards.

The time has come when more and more people especially men are getting into inking process so that if they get killed their families will at least be able to identify their corpses. No doubt, it has become a lucrative business for tattoo artists but the reason of getting tattooed in Baghdad (to be identified after death) makes me feel sad and sorry.

Getting inked: The only way out for Baghdad residents to be identified after death was last modified: July 31st, 2012 by Community Writer | Community.Drprem.com