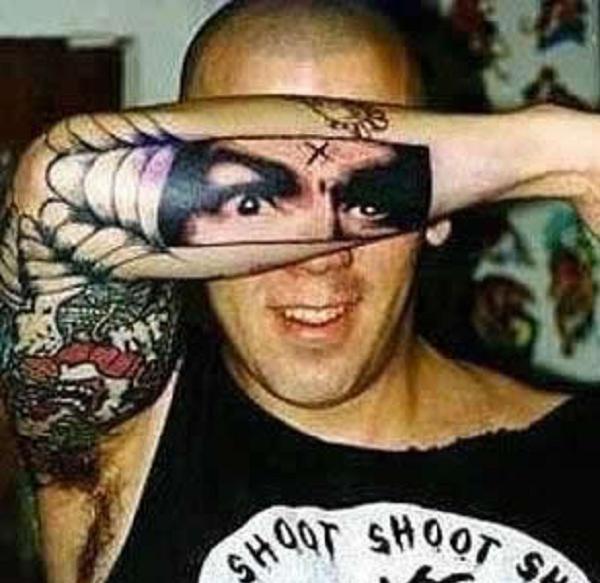 1. The skull and princess illusion

It is the design that symbolizes both the funk and the class. The Skull represents the funky aggressiveness while if you look closer you will find a princess admiring herself in front of a mirror. The design has a beautiful elegance. The tattoo symbolizes the duality of things. You can find something dangerous (Skull) at first sight but a closer look can reveal the beauty (princess). You can have another funkier interpretation that disturbing a girl during her makeup time can be dangerous.

2. The skull and the bonding illusion

This is another classy design. The first sight appearance makes it look like a skull. However, a closer look reveals its inner beauty of friendship where two humans are drinking holding hands. This design is wonderful piece of art. The apparent look is very scary but the closer look makes you understand the strength of friendship. It symbolizes the strength of two over one.

3. The king and queen illusion

The tattoo is an exquisite piece of design. If you look at the tattoo straight, it will look like a queen but if you look it from upside down, you can visualize the king. The Dual tattoo can be drawn on arms as they can be seen from any angle. The design symbolizes the gender equality. It creates the statement that men and women are same when it comes to humanity.

It is true that beauty lies with the perception. The tattoo may seem vague piece of trash art where a cartoon figure is playing a saxophone. However, the piece certainly transforms into a beautiful face with the closer look. It symbolizes the fact that one should not go for the outer appearance, they should search for the inner beauty. Saxophone mesmerizes the girls can be another fantastic explanation.

The design is an ambigram. The first straight look will read philosophy but the inverted look reads Art & Science. The tattoo design is quite elegant with lots of curvy letters. However, the meaning of tattoo is of great significance. It tells that Philosophy is robust with Art & Science. Art & Science together gives rise to Philosophy can be another explanation.

The tattoo is another ambigram. The straight look reads Saint while the inverted looks read Sinner. The tattoo is a piece of excellent calligraphy. However, the meaning has a religious touch that every human being is both saint and sinner. It is the perception that makes the human better or bad.

This tattoo is an exquisite piece of religious artwork. The other appearance makes it look like the cross and the crucifying. However, the closer look will reveal you the face of the Jesus. It symbolizes that the almighty god guides everything in the world. He is everywhere watching everything.

8. The fish and the bird illusion

When it comes to illusion, Escher has its own place. The beautiful arm tattoo summarizes the whole evolution. The outer look will just be fishes and birds but on closer inspection, you can find the hidden illusion that the fishes are transforming into birds. The tattoo symbolizes the transformation. Fishes and birds are on two different sides of animal kingdom. The design represents if they transform into each other, then humans can too.

This is a body art tattoo. The tattoo looks like a piece of scratches and lines but on closer inspection, you can find the spider tattoo looking out of the shredded skin. The design is very modern and it symbolizes the Spiderman character. It reveals that there is always a strong side underneath your soft appearance. The tattoo is hot favorite among the Spiderman fans.

It is beautiful duplication of M.C. Escherâs work of drawing hands illusion. The apparent look reveals just two hands holding a pen, but if you look closer, you will find that these hands are drawing each other. This is a famous work of Escher and symbolizes that two hands can create marvels. These hands are the hands of the creators. The tattoo is full of beautiful shades.

Which tattoo design should one go for?

Where to get a different design for...