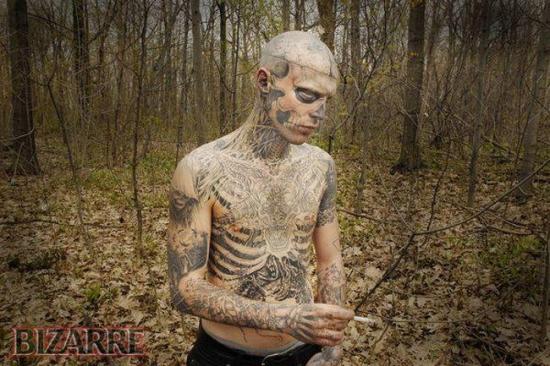 Here is something really bizarre and scary. Thanks to the macabre tattoos inked all over his body, this ‘zombie boy’ is earning quite a good bit of attention for himself. With the inner organs patterned on his skin, a sudden glimpse makes one feel as if he has been turned inside out! The rib cages, spinal cords, tendons, and intestines are all tattooed to give a realistic impression of a living skeleton. What makes it more horrifying is the vivid portrayal of insects and spider webs within his system, which gives the whole thing a somewhat raw look. The zombie boy has hardly an inch left on his skin that hasn’t been inked upon. With brain cells highlighting his head, his eyes surrounded by black tattoo designs and the same goes for his jaws and neck, the effect is somewhat sinister. Hooded skulls however adorn his arms, coupled with a few graveyard crosses. No wonder, all this makes him popular enough! Real zombies beware!