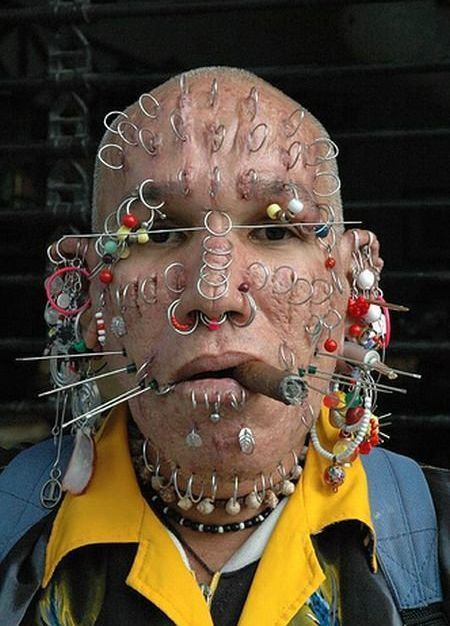 Unbelievable body piercings: How extreme can you go!!

Body piercing is a very luring but painful matter of interest which has been in the minds of people from ancient times. It has expanded its level of popularity in last twenty years and people can go through various on-line websites as well as magazines to find the best possible way to pierce the body. There are various celebrities who have been piercing their bodies with labrets and naval rings. Egyptians were the first to recognize this art and they used body piercing to reflect their status as well as beauty in front of other people. Today, the craze of body piercing has grown to an altogether different level which is no less than extreme. Here is a list of 12 extreme body piercings:-

This guy has made to the list due to his extreme love with the facial rings and pin piercings.

It took Kam Ma 7 hours and 55 minutes to get such enthralling body piercings by Charlie Wilson.

She holds the record for world’s most pierced woman.

There is nothing which can be said in appraisal of this man. He is a maniac and he does this.

Zygzag or Fishmaul wears huge cheek plugs as a representation for his group called BME modification.

He looks more of a traditional follower of body piercings.

He surpassed Brent Moffard’s world record of 900 body piercings with his 2008 head piercings. He is a doctor by profession and his name is Dr. Wei Sheng.