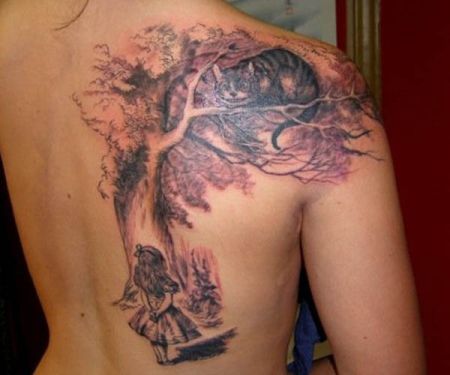 Though some of you might be thinking that getting a tattoo is the most weirdest thing one can do, but you will be amazed to know that US has many towns which are renowned for tattoos. Believe it or not, some do think that tattoos are the sexiest way to express oneself. Playboy, Maxim, FOX and AskMen are well marked tattooed parlor beauties, as they are considered to be hottest of all in the towns of US. The most famous Hollywood stars also cannot pull back their enticement for tattoos, as it can be observed from recent pictures of Britney, Katy Perry, Jessica Alba, Angelina, Megan Fox, Zoe Saldana, David Beckham, Brad Pitt, Hugh Jackman, and Johnny Depp. May be these names are behind the craziness for tattoos, not only in US but also in other countries. So letâs see the top 10 tattooed cities in the United States.

The so-called home to some of the famous tattooed celebs like Kat Von D and Angelina Jolie, Los Angeles has 4 shops for each group of 100,000 people residing in the town. The city is known for its tattooed people around and as per a survey report, Los Angeles has 150 tattoo parlors inside 10 miles of the city center. It has a huge and the biggest tattoo parlor in the world. And even though the count of people residing in LA (millions) is less compared to other cities, it is considered to be the most lovable tattooed city in US. So, tattooed people in Los Angeles must be proud and happy since it just you guys who have made your town so renowned for its tattoos.

The Kansas City which has more than 6 tattoo parlors for per 100,000 tattoo lovers. It is also a ‘tattoo-friendly’ place to reside, where you will get many online sites helping you to get a great designed tattoo by an experienced tattoo artist.

Austin, Texan opens up its arm for every artist in the world, from tattooed persons to a hip hop singer to dancer. Yup! you got it right; this place is known for its artistic admiration. They have a festival called South by Southwest (SXSW) for all those tattoo artists, who want to exhibit their art. It has 7.5 tattoo parlors for per 100,000 people.

Like Texan, Portland Ore is an another city known for younger audience and it has 12 tattoo parlors for per 100,000 people. There are many magazines and art communities, which are known for their tattoo articles and designs.

Flint Mich, the city that is known for its tattoo artists. Yeah! you read it right; here you will find the most famous tattoo artists. Approximately every one has a tattoo as per the survey (done by today beauty).

Yeah, we know it is quite surprising for you to find Richmond, Va in this list but sorry, we cannot be biased! It is true; Richmond, Va is known for tattoos, and it has 14.5 tattoo parlors for per 100,000 people.

As some quoted for Vegas that âwhat happens in Vegas stays in Vegasâ and this time it seems like on your body too. It has more than 94 listed tattoo parlors for per 100,000 people. Vegas is known for its beautiful tattoo designs from the well-known artists around the city. So, if you are going to Vegas in your next vacation then do not forget to get 1 on your body too.

The last but believe me not the least, Miami Beach, Fla has a huge number of tattoo parlors around. It has 24 tattoo parlors for each 100,000 people.