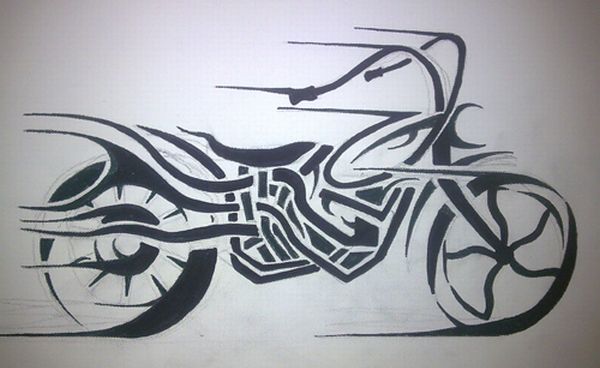 Tattooing has been in flavor since long. History reveals its roots to the New Stone Age, which was characterized by skilled farmers and manufacturers. While the choices in tattooing are diverse, some have successfully been adorned throughout the days. Considering the body as a wide empty canvas, humans have been exploring and innovating on the theme. The motorcycle tattoos are one such tattoo designs which are particularly related to a special category of people. However, all are not inclined towards having a motorcycle tattoo design on their body.

Motorcycle tattoo is an expression for the love and loyalty to the motorcycle. Some reveal their explicit inclination to a biker organization by adorning unique tattoo designs. Tattooing is supposed to be a revelation of lifestyle and individuality. In the tattooing world of bikers, it is important that the tattoo truly represents the wearerâs lifestyle. It can be considered offensive to wear one of these tattoos without being an actual rider.

It is not long ago that bikers were associated with criminals. They signified boldness, rebellion and carelessness. Sometimes, the tattoos may strike upon these features which have been so closely related to the biker tattoos. Biking essentially gives a sense of liberation and enjoyment. The tattoos also depict the essence of the rider. Today, professional and legitimate parlors have come up to aid the tattoo lovers.

The motorcycle tattoo designs have a wide variation. The most popular ones include the skull, an actual image of a motorcycle, an eagle, etc. Harley Davidson is probably one motorcycle tattoo which is evergreen. These tattoos can be temporary or permanent. The company name or the maker of the motorcycle is typically contained within the tattoo design. Many such tattoos also have the phrase âLive to Rideâ integral to them. You can get the images from the manufacturers. Harley Davidson tattoos have a special significance when it comes to style and superiority. These tattoos can have a traditional bar and shield logo or eagle (even eagle wings) which is the American symbol.

There is an âold schoolâ tattoo design. Preferred choices include women, daggers, dragons and blazing tires. These traditional tattoo designs are usually made on the shoulder so that you can easily show them off. You can also find some bikers having tattoo designed them on their back mainly when they want to get a very large and detailed tattoo. The back gives them more area to display their art work. Another place is the chest. Some, particularly the hard core biker gang member, even get tattoos on the neck and face.

The motorcycle tattoo can also display red eyes, snake or barbed wire. The eagle is also a popular design which signifies the sense of freedom related to the rider. The eagle has been regarded as a mark of freedom and independence in the United States. Tribal designs are also popular with bikers.

With biking gaining popularity recently, motorcycle tattoos cannot be left behind in the race. Even though there has been much deviation from the earlier ârebelling gang imageâ, the bikers prefer to get one on their body which signifies life on the road. A traditional club tattoo is also popular. You can have images, words or special characters engraved as per your choice. There are numerous options and languages to choose from. Biker tattoo signifies a certain belief, which is very similar to the flag of a nation. Motorcycle tattoos are not limited to men. Even women sport them. Mostly, they depict names of bikes or their man.

You would find the biker tattoos very interesting to read. A good tattoo can say a great deal about the individual who displays it. It is believed that a biker with tattoos symbolizes an insight into the various paths he/she treads along the road of life. Many tattoos are very tempting. But before you wish to get one, ensure that it can associate with you in some way. The biker tattoos are meant to be very symbolic.

Can one get a Leo symbol with...

How do you feel about firefighter tattoos?