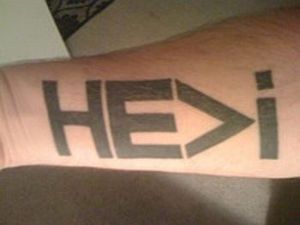 Once again we find a tattoo that praises God and only goes on to show how good always triumphs over evil in the long run. The tattoo has really come a long way from being considered a devil-inspired defacement of the body, and thus human soul, to being a billboard for carrying the Lordâs message. Just like this tattoo here which was originally inspired by an ink on a Californian rockerâs arm but turned out to be one of the most profound teachings of the Holy Bible! HE>i actually means ‘He is greater than I’ and from the scripture ‘He must increase, I must decrease’ (John 3:30). The symbol thus not only stands for oneâs total devotion to our heavenly Father but also symbolizes the need for man to remain within the limits of his humility as a mortal promoting the need for man to curb his pride among several other interpretations. So if you thought a manga/anime tattoo was ‘cool’ this one is sure to blow your mind by far!

For Army tattoos are still unmilitary