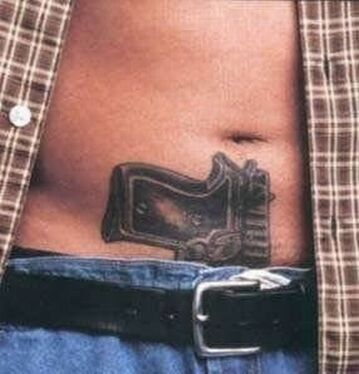 Yes, you have to believe this; the first three pics belong to a single dude and why not, when it ignites the gunpowder buried deep inside you. Apparently, it proves that body art indeed is the best way to express one’s obsession. However, some people do take it too far, but than how much is too much?

When we can tattoo knives and daggers, why not weapons. They do look good, especially when inked on bodies. You can ink that bazooka or machinegun or load yourself with any crap you want, including bombs, bullets and grenades, and get that instant adrenaline rush anytime you want. No, we would not like to invite trouble by digging into the minds of these people loaded with ammunition.

Loads of thanks to everybody whose pictures appear here; including artists and photographers.

Special thanks to: Modblog, Dan Henk, Photobucket, Images In Ink and Tons of Tattoos

Get ready for live tattoo shows in...