Home Off Beat David Beckham inspires Marc Anthony to get a new tattoo! 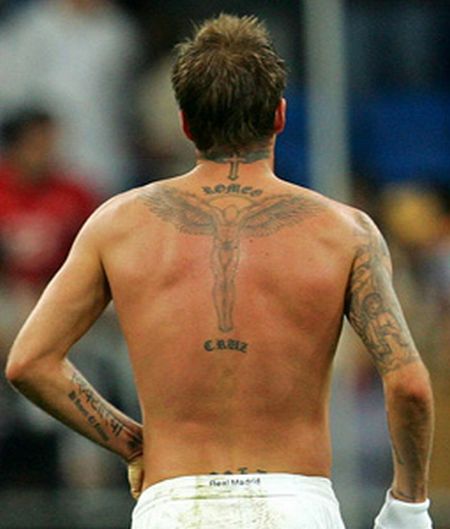 David Beckham inspires Marc Anthony to get a new tattoo!

It seems that since moving to Los Angeles, David Beckham has inspired more of Hollywood’s leading men than actually playing any inspiring football. It seems that the former English football captain is hitting the tabloid tales more often under the ‘entertainment and gossip’ category than under the ‘sports’ column. Now he makes headlines once again by inspiring his newly found close buddy Marc Anthony to get another tattoo.

According to the news reports, Anthony is very touched by the tattoos on David and he is motivated to get one too. (Now I hope that didn’t sound all that bad & came off as a clean sentence). The two stars seem to be bonding fast as Marc is supposedly keeping David on his toes with his Spanish, that David picked up while playing for ‘The aristocrats of world football-Real Madrid’.

David seems to be returning that favor by challenging Marc to get a new tattoo. Marc already has name of J-Lo tattooed on his wrist, so it is anyone’s guess what he is going to try. Now the former Man U and Real Madrid star seems to be really enjoying his time in LA. David always made more headlines for off-field news, hairstyle & tattoos than for his on-field skills. When he did make the headlines for sporting reasons, they were more often for high profile red cards and huge penalty misses.

While no one disputes, his ability to cross the ball with amazing accuracy on his day and to make the most astonishing shots from a dead ball situation, it is sad to see David ride away into sun-set like this. When his fascination for life in LA runs out, I surely he returns to do what he does best and that is… Sport new hair styles! (Ha ha ha) But, by then Marc might be covered with tattoos!