Home Off Beat Britney Spears Behind The New Star Tattoo 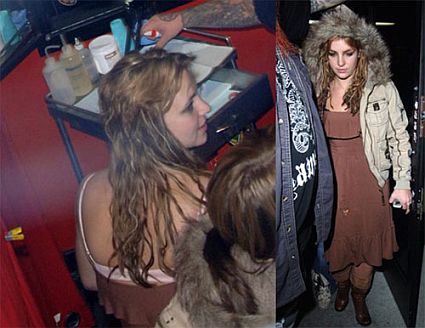 After Sienna Miller now Britney Spears in a ‘Star’ tattoo to celebrate her new life after getting divorced from Kevin Federline. According to reports ‘Hit Me Baby’ girl Britney Spears was accompanied by her little sister Jamie Lynn and an unidentified friend when she got a small black star on her right hand at Los Angeles’ Devil Doll Tattoo Parlour at around 10pm on last Tuesday night.
It’s not her first tattoo but it numbers six while others are:- A fairy on her lower back, a butterfly and vine on her right foot symbolizing freedom, a pair of pink dice on her left wrist (that matches a pair of blue dice on K-Fed’s right forearm), a Japanese symbol on her bikini line and a Hebrew etching on her neck.

‘Star Tattoos’ are popular in many fields like it was trendy with the US armed forces fighting in Afghanistan and Iraq. They are hypothetical to guide the wearer safely home, as if the North Star was said to guide ships back to their homeport in the days of sail.The same tattoo can be seen on the wrist of Linday lohan in the same spirit.

Some lesbians and gay men also ink stars inside the wrist (by Thesun.co.uk).

For some it marks the split of their relation like Sienna Miller and Britney Spears who makes an entry to a new world of singles after an end with their relation with Jude Law and Kevin Federline. It is a pagan sign also which symbolize Goddess Venus and can be seen on singer Paolo Nutini.

Every tattoo is holds a varying significance for all different people who wear them. For some it reminds them of something, for some its mere a fashion symbol and for some it is inked as a mark of celebration. You can check out more celebrities with their type of significance here.

Squaddies wear a commemorative tattoo as a...