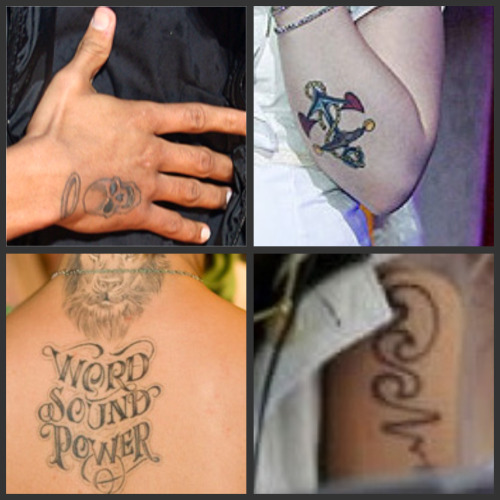 Basically, tattoo is a form of body modification. Many people get tattoos as a form of self-expression. People get inked thinking that tattoo is something that they would love to die with. People get inspired from the celebs and get themselves inked. The fans are obsessed with their favorite celebrity’s tattoos. What does the celebâs tattoo say? What do they mean? Sometimes it is obvious, sometimes they just donât know. But these days it is a fashion to get a tattoo done. Here we give you the list of top five celeb tattoos that will always be loved.

When it comes to tattoos, there is just one name that strikes your mind at one go and that is Angelina Jolie. She possesses a serious love for tattoos. She regularly gets featured in celebrity news magazines and websites featuring and talking about her new tattoo. She has at least 12 tattoos all over her body and she has quite a lot experience with tattoo removal. She has inked herself between shoulder blades saying âKnow Your Rights.â Few of her tattoos says determination, strength of will, a prayer for the wild at heart, kept in cages and so on. She inked herself with Roman number 13 as she doesnât believes in superstitions. Apart from all these, her most talked about tattoo is the 12 inch long and 8 inch wide Bengal tiger tattoo on her lower back. Definitely this tattoo became a trendsetter for many of her fans. She did it to celebrate her Cambodian citizenship. The tattoo was done in a traditional Thai style with a manual needle. Tiger is also a symbol of power and Angelina Jolie is definitely a powerful person in Hollywood.

Megan Fox has a handful of tattoos. Bute her most noticeable one is the Marilyn Monroe portrait on her inner right forearm. She got it done when she was just 18 years old. After she got inked with the portrait of Marilyn Monroe many youngsters started idolizing Marilyn Monroe and started getting tattoos to mark their obsession with her. But Megan fox quite did not like this. When she grew up she realized that Monroe had a negative personality and she did not want to attract this kind of negativity in her life. She did not even liked the youngsters getting themselves a tattoo of Monroe. So off late she decided to get rid of the tattoo. She strongly opposes the fact that tattoos are forever and she says ‘the removal of something that was once so important to me is not painless.’ She has other tattoos including Shakespeare’s reference on her shoulder and her husbandâs name on her lip.

Eve Jihan Jeffers, is better known as Eve or E-V-E. She is an American rapper, singer and actress. She has a huge fan following. After her paw tattoo her fan list got longer and longer. She has two unique tattoos of paw on her breasts. Eveâs paw print tattoos are often imitated but never duplicated. It is rumored that the paws represent the paws of a Pit bull which is a common theme with their group. Her fans commend her for being so brave to tattoo in such an attention grabbing area. The paws look extremely attractive and pretty real. Many of her fans did the same tattoo but her tattoo looks the best.

Who says that neck tattoos are just for beefed-up macho men? Vanessa Hudgens got herself inked with a purple and green butterfly tattoo on her neck. Though she feels like a bad ass after getting herself inked. Off late, she revealed the idea behind her butterfly tattoo. Just a week before her birth a butterfly landed on her momâs stomach and her mom named her Vanessa as it means butterfly. Itâs a Latin derivative word. This is her first piece of body art. She won millionâs of heart by her excellent performance in ‘High School Musical’ having uncountable fans. These days, every third teen is found with a butterfly tattoo. Vanessaâs butterfly tattoo turned out to be a trendsetter for millions of girls and her fans.

Scarlett Johansson’s tattoos are beautiful, just like her. She is known as the one of the sexiest women in Hollywood. The sun over the sea tattoo on her arm reflects her personality and her beauty: radiant like the sun and romantic like the sea at sunset. Scarlett Johanssonâs California-esque beach sunset tattoo has a secret message that the star does not want to disclose to the public. The tattoo is circular in shape with bright elegant colors in it. Recently, she was seen flaunting her tattoo, but the reason behind it still remains a secret for her fans.