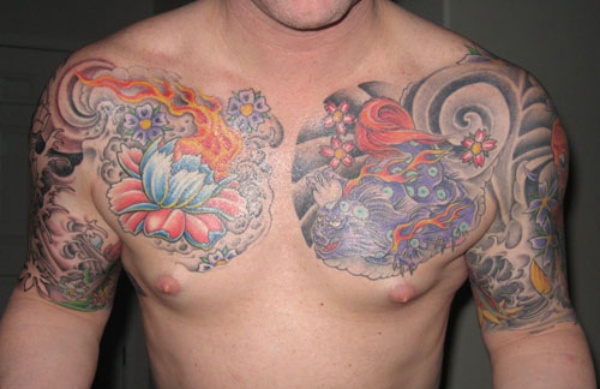 Once thought to be the exclusive adorn of tribal warriors, sailors, and bearded bikers, tattoos are fast finding favor as a trendy fashion accessory for a lot more people today. And it’s not just skulls, crosses, and anchors they want, tattoo lovers are hankering after well-nigh everything from Sanskrit scripts to oriental dragons, old-world symbols, pin-up girls, and even the names of their current sweethearts to ink on their skins. Body parts too are getting more adventurous as places to showcase tattoos. With the once popular and easily visible arms and thighs, giving way to the intimacy of the chest as the latest hot spot for stunning body-art. For first timers, of course, the chest would seem a most agreeable place, especially since it isn’t always as visible as the arms and legs. But before you go taking your shirt off at the nearest tattoo parlor, there are a few things you must consider.

For starters, a tattoo is permanent. So think of a design you really like, and one that won’t go out of vogue in a flutter. Neutral tattoos include tribal designs, and ancient scripts, and are a favorite with both men and women. For women, flowers, ornaments, angels and hearts make for hallmark tattoos. For men, all-time fashion statements come in the form of animals like dragons, sea-faring symbols like ships, and even pierced hearts. You’d be well advised though to steer clear of the temptation of etching your current flame’s name into your skin. We needn’t tell you what happened to Johnny Depp, and how he had to change ‘Winona Forever’ to ‘Wino Forever’.

Getting a tattoo can hurt, but the pain varies, especially for first-timers. And more so for men, since the procedure involves tattooing over the chest, a few ribs and the clavicle, where the skin is the thinnest and not as fleshy as the arms and thighs. For women too the painful areas include those just above the breasts, and over their ribs.

3. The best time to get a chest tattoo

The best times are in spring, autumn, and winter. In summers, the hot sun can be an absolute pain, and wounds take that much longer to heal, since the body is prone to sweat. Women, on their part, are also most sensitive a week before and during their menstrual cycles and are well advised to plan around those dates.

4. Precautions before getting a chest tattoo

Typically, one should refrain from alcohol and caffeine the day before till the day after a tattoo, since both cause the blood to thin, leading to stronger bleeding. And check with your doctor for any autoimmune disorders you may have, as these are likely to result in post-procedural problems. It helps to apply a good body lotion, if you aren’t already doing so, for at least a week before the tattoo to ensure healthier skin and better post-procedure results. Avoid the sun too, for this causes the skin to dry and be more prone to damage.

5. Precautions during and after getting a chest tattoo

The most minimal of skin interventions can lead to a host of problems due to poor hygienic practices. So choose your tattoo parlor with care and insist on the use of sterilized equipment to prevent the risk of diseases, including inflammation, tetanus, and even HIV. During the healing process, avoid the sun again and all forms of sunblock. Do not cover the area with a bandage and stay away from swimming pools and direct streams of water on the affected area. The right steps you take will help prevent what seems like a cool idea today from turning into your biggest regret tomorrow.