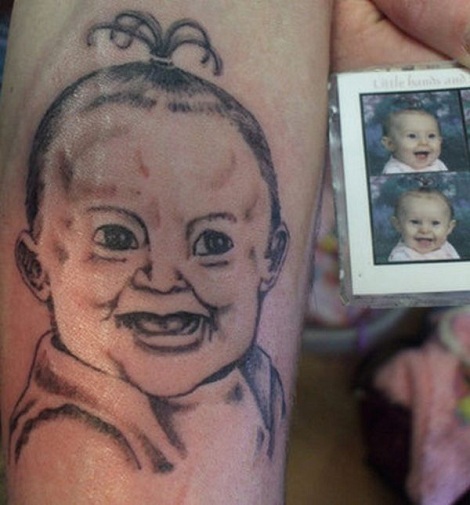 When it comes to show off your true self, tattoos are considered one of the best conventional methods of art and self-expression. The latest fad in tattoo arena swirls around inking photos onto your skin. Not only are they a perfect way to symbolize your eternal affection towards your love ones, but they also strengthen your relationship with them. No matter how good or ugly they look, however, they stay with you for the rest of your life. In case you are planning to embrace someone’s image closely to your skin and permanently etching a photo tattoo, then we would recommend you to think twice before undergoing the needle, for results could become a little disastrous. If you don’t believe us, then take a look at this interesting collection of worst photo tattoos that will make you laugh your heart out.

When it takes 20 enduring hours of painful needlework and a big sum of $2000, the least you would expect from your tattoo artist is to bestow yourself with a praiseworthy tattoo work. Unfortunately, for Alan Jenkins, he just had to walk away from the tattoo shop with life-size hideous faces of his wife Lisa and two adorable daughters. His 36 year old wife, however, left him estranged for a young 25 year fitness instructor. Poor Alan!

You might call inking your face on your skin an expression of self obsession. And it goes without saying that how much MTV “Jackass” star Steve-O loves himself. But unluckily, the tattoo of his own portrait that he has etched on his back looks nothing like him. The tattoo features Steve-O with his signature prankster smile and both thumbs up.

Fred Durst, the infamous band mate of Limp Bizkit, might have stormed down the tattoo shop to have his inspiration, i.e., Nirvana’s front man Kurt Cobain’s face tattooed on his chest. But his tattoo artist did him or his fans no favor by crafting Kurt’s handsome face and turning it into something not worth looking.

Though Eminem wanted to convey his eternal love for his daughter Hailie by inking her beautiful face on to his right upper arm, the portrait of Hailie with some roses around her turned out to be extremely ugly and wretched. We don’t think Hailie looks like this tattoo from any angle. What do you think?

Edward Cullen is known for his charming, mesmerizing face, but little did we know that this enchanting vampire could look so scary. This Californian guy has etched a horrible face tattoo of Twilight hunk Edward on his back, and it looks, well, not-so happening.

Immature and inexperienced tattoo artists can ruin even the most artistic thought behind any tattoo. If you don’t believe us, you can take a look at this extremely hideous photo tattoo that this guy owns. His tattoo artist didn’t take much effort and time to make this sentimental tattoo a disaster. It looks like some zombie is smoking while thinking of something unappealing!

Joining the bandwagon of failed attempt at photo tattoos is this an uncanny Navy portrait. Some American guy wanted to etch this handsome looking navy personnel on the upper half of his back. Even though the guy braved hours of unbearable pain to ink this tattoo, the end result didn’t turn out to be productive, as he must have envisaged.

8. Katy Perry in her most horrible avatar

This native Californian guy fantasized about Katy Perry’s envious silhouette. So, he planned to ink her head-to-toe image on his right hand. Unfortunately, his plan backfired and despite suffering from all the painful needlework, this guy was left with a girl who looked nothing like Katy Perry. In fact, the girl looked utterly despicable.

Etching your beautiful daughter’s baby face is the best way to show off your affection for her. So, to flaunt off his love for his cute, new-born baby, this affectionate father thought of inking her adorable face on his right arm. Unfortunately, he turned up to the worst tattoo artist of his town, and ended up having a weird face tattoo of his beautiful kid. The tattoo version of his cute daughter looks more like his grandmother than of his young baby. All the wrinkles and horrible facial expression made her cute face look disbelievingly unusual.

When talking about the worst photo tattoos, mentioning this horrible avatar tattoo is a must. After all, if you are a fan of James Cameron’s Avatar, you would want to know everything about it. Well, apparently some guy flaunts a tattoo version of Neytiri, which looks bald, puffy and timid, instead of courageous. This Avatar failed tattoo made Neytiri look like a skimpy lizard with eyes looking demonic rather than inspiring.