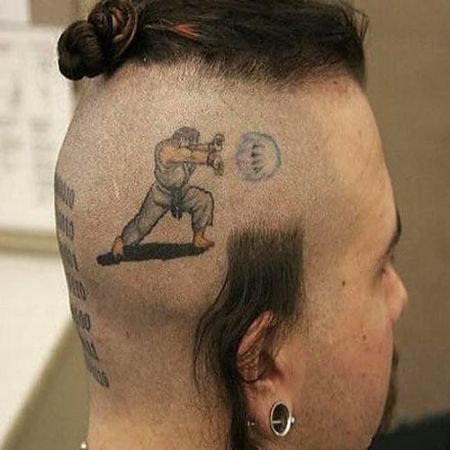 Look before you get yourself tattooed. We are sure you are quite aware of the cumbersome process you have to undergo for getting yourself tattooed, if of course, you do not take into serious consideration the money involved in it. Do think about the headache involved if you need to remove the tattoos. Hold on, we do not hold any reservation against tattooing. Neither do we have any intention of discouraging you to have your body tattooed to make you look like a perfect metrosexual being. It is just that we want to bring to your notice that do not flow with the tide and end up printing anything on your skin. Have a look at ten such worst tattoos we have complied here for you, which are nothing but mess.

Have a look at this tattoo. Do you think there is any bit of artistic sense in it? Frankly speaking, we do not. It appeared rather queer to us. Even the sex of the man got hidden under the sheath of multicolored ink. He is probably suffering from identity crisis. It is now really difficult to make out if is it a man or a woman. According to us, this man looked like an extraterritorial being, who can give us spine chilling sensations and goose bumps on skin at the wee hour of the night.

We are confused! Was this woman crazy when she decided to go for tattooing? Women are already blessed with sexy and slender legs. Even the most bulky woman will walk miles on a treadmill to get slender Barbie legs. But this woman probably had a different plan in her mind. She ended up tattooing numerous dots on her legs, resembling the popular game we grew up playing with, ‘Match the dots’. One thing is praiseworthy for sure, she will not get bored during her leisure hours as joining the dots will keep her preoccupied.

Third in our list is the generous attempt of a man who tried to give his deceased wife immortality by getting her pretty face tattooed on his arm. But oh my God! Look what happened finally. The pretty bride got transformed into a devil, with an evil glee. Now, this is beside the point whether the attempt of the man is of a simple show off without any heart in it or the outcome of the unskilled hands of the artist?

God knows what people have in their brains! While this comment is 100% true for every individual, this guy is totally exempted from it. He probably tried to overrule Godâs own design by having this brain tattooed on his hairless scalp. Although there is nothing that can deny it is extremely yucky, the man was humble enough to let the world know what was going on in his head. But nonetheless, the idea is idiotic.

Do you have any idea what made this grandma realize that she will look more adorable having her whole body inked like this? To tell you the truth, we do not have any clue about that. Whatever might be the intention of this grandma, we must agree that the artist spend quite a lot of time and patience on this eerie grandma. We cannot overlook the patience of the grandma either, whose welcoming smile and embracing hands are sharp juxtaposition to her body tattoo.

Although we have known so far that tattooing is primarily about painting designs, motifs and figures on the body, this woman gave it a new dimension. The scars, deposits of blood and black patches on her skin are not real, they are work of a tattoo artist. We do not know for sure what made the women get her the makeover of a perennial melancholia, but we cannot praise her idea at all.

Next in our list is this creepy tattoo on the chest of a man. This guy probably tried to portray that a gremlin is crawling out of his chest by tearing in. But the whole bloody affair is beyond tolerance. Blood oozing out of his body and running towards his tummy is simply yucky. If he had any intention to terrorize kids with this tattoo, then we are sure his spouse will also be chilled with fear. Canât these people have better ideas on tattooing?

8. Skeleton in the womb

The first thing that hit our mind when we saw this skeleton on the womanâs belly was that how idiotic a tattoo can be? How can a woman think of bearing a skeleton printed on her womb? Probably, there are a few handfuls who can think such awful things. But we must praise the artist for his fine touch as he never failed to give the right posture of a neonateâs body within the womb during the matured stages of pregnancy. Anyhow, overall the idea is simply idiotic, with neither brain and nor any heart in it.

This sleepy head did not find any better reason to stay awake than to have pupils inked on his eyelids. This is another tattoo that can be voted as the most idiotic. We are clueless why this guy could not get a better idea in order to stay awake till the wee hour of the night. Probably, it is because he lack brains. But whatever may be the reason, he simply looks as dead a corpse in this tattoo.

This man undoubtedly remains hungry forever. This glutton is well assumed by means of his bulged out belly. But he made it even clearer to the world by tattooing ‘Hungry’ on this full blown belly. The concept is simply ridiculous as he should have thought that tattoos are permanent stuffs. So, he has lost his freedom to remain bare chested forever, in case if he does not like then he needs to go into the cumbersome process of removing the tattoo again. But, as we said, this tattoo is one of the most idiotic tattoos we have found, so it gives hint of the level of IQ of the guy too.