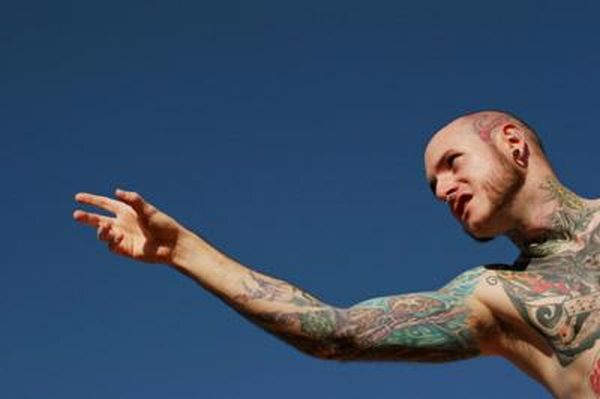 There are hundreds and thousands of tattoos deigns available at the tattoo studio by far. Some are made only with black ink while some are made with different colors. Tattoos are no longer a taboo. It has now become fashion statement for most of the guys. Tattoo has now become the mainstream culture for some time. These days men are getting their bodies tattooed may be because of different reasons out which the common reason is to make a drastic change in the life by highlighting something which have influenced them in some or the other way, here are 10 popular tattoo which guys usually do.

This type of tattoo is more famous in the counterpart in west. This shape of tattoo is a mythical creature which is considered as power, goodwill and wisdom. It symbolizes the union of opposites. These days such type of tattoo is the fashion stamen and is common among boys. It can be ultimate tattoo statement if you do it on a grand scale. Such type of tattoo is done by the people who want to show some kind of power and fierceness of dragon. By having this tattoo the person surely gets walk on the wild on the side kind of image. However to make this tattoo involves great cost. It is a serious tattoo which needs huge money to be spent. You can make this tattoo on leg, entire arm or even at the back if possible.

These tattoos are considered as primitive style of tattooing, they usually donât involve much of artwork. To make this tattoo classic grey shading and black ink is used. It is said to be the most popular tribal and considered as Celtic style tattoos. Chinese symbols or old English lettering comes under such category. If you are a guy and planning to get such tattoo done then you must make it around chest, navel or calves as these days it is a fashion among young teenage people. For older men, you will find abstraction tattoos mostly done on arms, upper neck and shoulder.

Usually such type of tattoo is the dedication of love to your mother. The heart from ancient Egyptian tomb paintings is the symbol of emotion called love which is red in color. The heart comes with the flowing scroll on foreground where mom is written in the graceful font expression and gentle sentiment. Usually a guy who is sentimental and emotional towards his mother do such type of tattoo.

This shade of tattoo you will find in the compass which shows directions. It is also represented as not star called Polaris. This tattoo can be big, or of two colors or small. Usually such tattoo is done among the guys to give a retro feel. Guys do this tattoo on the chest or forearms side.

Skull is said to be one the unique and intermediate tattoo which is similar to human skull. This part is more famous as compared to other skeleton parts. It basically represents the human death. However it is not necessary that such tattoo only symbolizes death or destruction. It is also said to be the part if suite of tattoo images derived from the spirit of “memento mori” which means remember that death will come someday. It is a message that reminds us that life is too short which must be cherished precisely. It is done by the fans of macabre gravitate and people who have lost something really precious or who really understands the importance of life. If this type of symbol is like a reminder for you then you can make it anywhere may be upper arm, forearm, chest or even lower leg. The fact is people who choose this tattoo can get it done anywhere except head as it might seem little creepy.

It is the symbol of Christianity which is more popular and common these days. You can do such type of tattoo in different shapes or sizes. It is usually done by the Christian guy or the one who believes in Christianity.

Most of the boys usually do this tattoo to dedicate their love to their girlfriends. Such type of tattoo is usually done on Valentineâs Day which is the symbol of love. This tattoo can be the beginning or end of the relation. It can be sometimes a commitment from the guy that his lady love will be his love for ever and which he will not let go off from life ever. Usually people who give commitment to wife or girlfriend get this tattoo done. It is choice of the boys who have dared to show their love and hopeless romantics. Most of the guys usually do this tattoo on arm or the place where it can be seen.

Most of the Japanese writings systems are based on ideograms and hence for most of the guys it is like a symbol that expresses the thoughts in few symbols. Usually people select the Kanji characters which spell something desires like love, strength or luck. Such type of tattoo is done by the men want to capture something exotic in their skin. Guys do this type of tattoo in small size on the back of neck or even lower back.

Pinup girl is the women who donât need any kind of introduction but only some explanation. She is the symbol of sex appeal which eliminates the sense of pretense. What makes her attractive is the kind of obvious and guiltless flirtation. Usually such type of tattoo is more common among teenagers. Guys who have great body can do it on upper arm or chest.

Tribal tattoo is the common and popular tattoo which you must have seen on many guys. It is done in solid black with curves which also comes in complex patters. Usually such tattoos are founded in Polynesia tattooing traditions. Some men do it just to look cool while some do it as a bit of intimidation with boldly black abstract designs. The tattoo looks amazing on the muscled arm.

What are koi tattoo designs?