Home Off Beat Would you like to corrupt your skin and soul with a plagiarized tattoo? 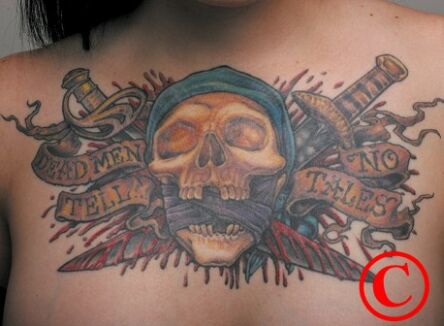 Would you like to corrupt your skin and soul with a plagiarized tattoo?

Dead Men…Tell No Tales! This is what the skull and dagger tattoo reads on rock-n-roll pin-up queen Amina Munster’s chest, and don’t you dare to copy it on your skin without her permission as it’s copyrighted.

Yes, Amina, who’s into “intoxicants, shotguns, and hockey”, as she boasts in her Suicide Girls page, has taken copyright of his skin art inked by Tim Kern of Last Rites. She took the step when insulted by a California tattooist Brandon Swartz who ripped off the design and didn’t even apologize.

But now Amina has ensured that no one plagiarize her work by simply registering her tattoo with the US Copyright Office after getting an agreement from her artist Tim Kern.

Amina’s chest piece was based loosely on other art, and adapted to be an original design, specifically for HER, to fit her body. I spent many hours making sure the design was just right….Seeing someone else rip off our tattoo makes me sick to my stomach. I’ve been tattooing for ten years. I know that tattoos get copied and usually poorly. The Internet is rampant with examples of this.

I raised the issue couple of months back and strictly support and congratulate Amina for the move. You’re mercilessly killing the art by stealing it without the owner’s permission. Tattoos are strictly associated with one’s emotions and feelings and ripping them off is just like stabbing at someone’s back.

Would you like to corrupt your skin and soul with a plagiarized tattoo? was last modified: July 31st, 2012 by Community Writer | Community.Drprem.com