Home Off Beat Water tattoo design to die for 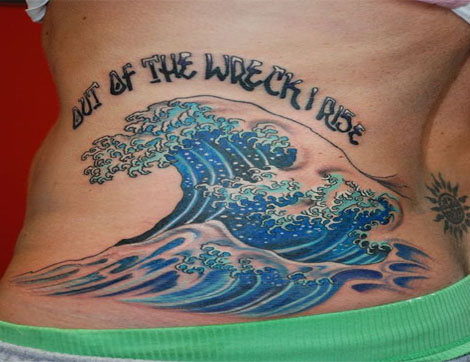 Water, as an element is the said to represent the Feminine and considered as a powerful force for change. And thatâs one of the reasons why water tattoo design is counted as an extra ordinary tattoo. It represents the inner strength, but is soft at the top. Getting a water tattoo designs, where the picture of water is very prominent is too popular across a wide variety of tattoo genres. I donât need the usage of blue color time and again to have a water tattoo, rather itâs white color waves gives you a feeling of strength in the tattoo. Generally itâs considered that dragon tattoos have a dangerous looks. So, let me tell you that Water dragons are supposed to be the most serene out of all. Way back in history, there are four basic elements of world , earth, water, fire, and air. And water being so powerful, with beautiful colors is always loved by the tattoo lovers. Talking about Japan and China, the water is represented by Koi and Carp. Asian tattooing often features water and waves as a motif.

Basically water is an element which is associated with the principle of moisture. Itâs also associated with womb water, where an individual life comes from. If you look at the above picture, the waves are at their peak, which tells that an individual is not at all at peace. The waves are striking his inner confidence again and again, probably this can makes a man bit shaky. The color combination used here is just black and white still this can be find this tattoo an attractive one. Water is actually cleansing, beautiful, calm and sometimes tumultuous.

Itâs just like fire, can sustain lives or at times can take lives. Mostly tattoo lovers like to have Japanese style of water tattoos. For the reason, these can range from characters to woodblock, or from symbols to paintings. These tattoos are usually made in white and blue tones, but to get them in red, orange and green colors is not so unusual. Itâs not uncommon to see the water tattoos that depict a story that water appears in.

Water tattoos basically have a nice calm look, but sometimes the it is made in such a fashion which makes one look extra ordinary, because the waves are never calm at sea shore. The mutability of this element makes water tattoos a great option when you want to be inventive with your body art. For me water tattoos are as calm as they are in the mid way, just trying to reach the shore.