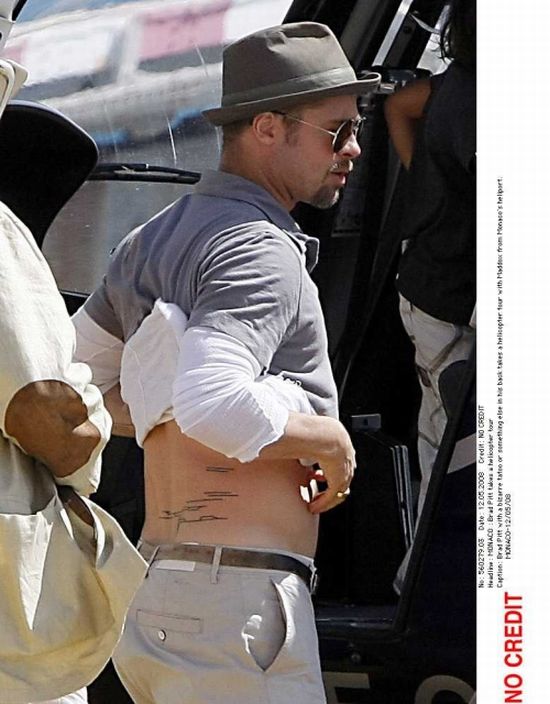 Aha! This is what you call a lovey-dovey couple and a real hubby dear! I mean thanks to the conjugal ties Brad got ready to even carry something as weird as this (God Knows what!) New Orleans Levee System tattoo and flaunt it about. I mean, I wonder hadnât it been for the wifey dear Angieâs work of art, by any chance would Brad have been ready to do something similar rather get something similar tattooed. I mean does it at all stand for anything, I donât know may be my witâs falling short. If you think I am an imbecile, why donât you just check up with the levee system image, find if they look similar anyways!

Anyway, when it comes to celebs just everything and anything looks perfect, that least that has to be. Hereâs what Angie had to say while we were wondering what on Earth was peeking here and there on Bradâs back. According to her,

I drew that. We went to Davos. Itâs not that we were bored at the World Economic Forum, but one night we didnât have anything to do, so I was drawing on his back. It is permanent. But I was just sketching on him. He just liked it! The picture everybody saw was kind of awkward, but it just lines up beautifully on his back, just enhances the part of the body I like. I mean, itâs meaningful in that itâs us making angles and shapes out of each otherâs body, that kind of a thing.