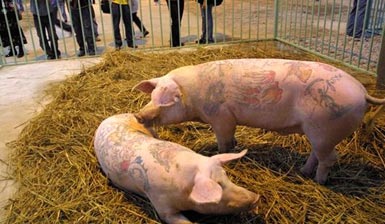 Since long tattoo artists are etching their skills on human skin, however, Belgian artist Wim Delyove is on a different mission. Wim is tattooing pigs since 1990s in his ‘Art Farm’ in China and we are not sure whether he is doing this for the love of the art or for his bizarre inclination towards beatifying these chubby hogs.

Apparently, these ‘guinea pigs’ are mere objects of art, which Wim Delyove, who consider these tattoos as paintings, is trying to make immortal. Wim was once forced to close his ‘lab’ after facing public objection with respect to his tattoo of the Soviet leader Vladimir Lenin on a pig, however, we are not sure whether he is still giving those colorful shots to pigs at the Art Farm, where he later moved in. Anyway, some of your might consider it as a good way to make markings on farmhouses.

Angelina Jolie Plays With Her Tattoos