Home Off Beat Tattoo, What do they say? 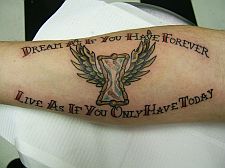 Tattoos have symbolic meaning and significance. There are many examples of that but I am only writing few of them. The Angel tattoos which have extreme significance pertaining to religion. The wings are the most commonly used for designs. In addition, these wings, are inked as full designs are added with crosses, wordings and other elements that are used to complement their beauty. Some decades back people were forbidden from inking these tattoos especially those, which included spiritual symbolism such as the angels and crosses.

The Tribal Tattoos tend to display history and in some cases about the social status depending on the tribe which used these tattoos. The tattooing meant something else for American Indians who used tattoos to show their maleness, usually by tattooing animals on them. The Polynesians used these tribal tattoos to express the history of the person wearing it and to identify his status in society. The Ancient New Zealand people usually tattooed their legs and faces. The facial tattoos were used generally for individuality. The Celtics used tattoos with knots, interweaved laces, abstracts and mythical characters.

These are few types of tattoos but now, we can see lots of fashionable designs prevailing in the society. We cannot analysis anybodies mind for a reason why they have got that tattoo inked on themselves. It is their personal thought that encouraged him for his tattoo.

Tattoo, What do they say? was last modified: July 31st, 2012 by Community Writer | Community.Drprem.com

Ban Tattoos! But Why?