Home Off Beat To Proof: A tattoo tribute! 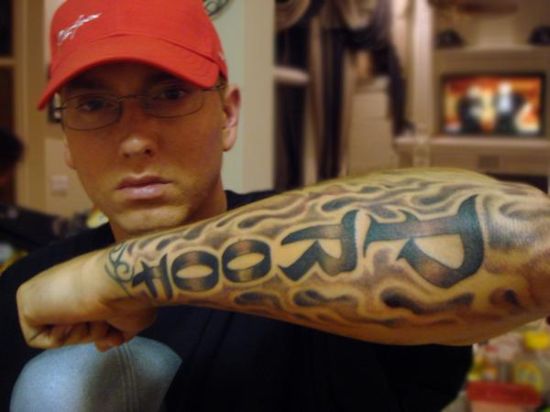 Eminem as we all know, is a great tattoo aficionado. Seems he believes in expressing himself through tattoos. He already has so many tattoos on his body (of his uncle, his ex-wife, his daughter, D12- his band).Somehow he managed to squeeze in another one. Itâs a tribute tattoo. Tribute to his band mate and best friend Proof, who was killed two years back.

Guess what, Proof himself had this exact tattoo, in exactly the same spot. With almost his whole body covered with tattoos, Eminem found a spot to pay tribute to his friend and that too in the same part of the body, where his friend had the SAME tattoo. True friendship I can say!

Missing someone is really painful; Eminem seems to be going through the same pain. I feel really sorry for him but proud too that he still remembers his best friend and does whatever he can to make his friend remembered throughout.