Home Off Beat Paint Your Skin with a Lifelong Souvenir 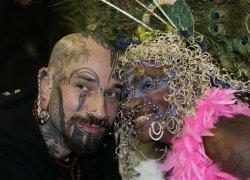 The first tattoo convention is rocking London. Miki Vialetto has brought the show to London after showering its flavors in Milan for four years. The three-day extravaganza is thronged by about 150 artists from all over the world, including countries like Croatia, Japan, Australia, Greece, Italy and Indonesia. Tattoo guns are playing their colorful games and the artists have an opportunity to show their craftsmanship on almost 15,000 to 20,000 people in three days.

You can also have glimpses of tattoo history in a temporary museum. The best thing about the event is that all the equipment are cleaned in a sterile room, and disposable needles are used. A cultural phenomenon that one can hardly afford to miss! Read More>>

Paint Your Skin with a Lifelong Souvenir was last modified: July 31st, 2012 by Community Writer | Community.Drprem.com

Top 10 Tattoo Designs That Would Magnetize...