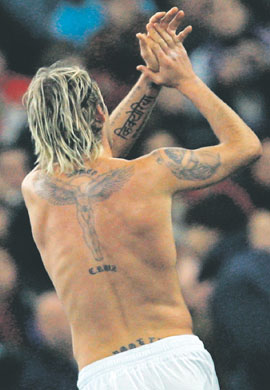 Meet Louis Malloy the real man behind David Beckham’s tattoos. Malloy has given impeccable shots of his tattoo gun to his elite clients that include Paul Ince, Roy Keane, David and his wife, the former spice girl Victoria. He claims that there is no glamour and stardom for him, its pure business ‘it’s all for art’s sake’, as he says. As soon as the job is over he’s on his route back home.

42-year-old Malloy, who inked the giant angel on Beckham’s back, told The Sun newspaper: ‘There are no private jets, limousines or beautiful women waiting for me on arrival. He added: ‘Friends are always surprised when I tell them about the time I flew to Madrid and was booted out of Beckham’s office straight after I finished the tattoo.’

The award-winning artist with 25 years of experience under his belt was never even asked for a drink and felt like a servant, but he never minds, for arts sake, right.