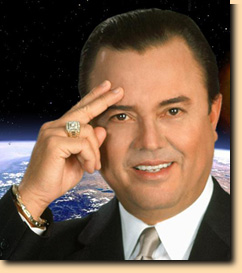 Jose Luis de Jesus Miranda with 666 tattoo etched on his arm, is new cultish leader who thinks he’s God. His followers call him ‘Daddy’ and he says, ‘The spirit that is in me is the same spirit that was in Jesus of Nazareth,’

I wonder is he really a cult minister like David Koresh or Jim Jones.

De Jesus shows his sumptuous cult through his church- Creciendo en Gracia, which outstands any other building in Miami. De Jesus earns $136,000 salary

But lives more lavishly than that. During an interview, he showed off a diamond-encrusted Rolex to a CNN crew and said he has three just like them. He travels in armored Lexuses and BMWs, he says, for his safety. All are gifts from his devoted followers.’

A heroine addict De Jesus, 61, grew up poor in Puerto Rico and said that he learned that he was Jesus reincarnate when angels visited him in a dream. I hope he is not suffering from Schizophrenia.

Explanation regarding the 666 tattoo on his arm

However, 666 is numerically associated with Satan, but de Jesus says that 666 and the Antichrist are, like him, misunderstood.

According to De Jesus Antichrist is not the devil, and he’s the being who replaces Jesus on Earth.

De Jesus’ claim of being Jesus has angered Christian pastors and they call him fake.

His followers are tattooing 666 to show their affinity to his propaganda. “If somebody tells us drink some Kool-Aid and we’ll go to heaven, that’s not true. We are already in heavenly places,” follower Martita Roca told CNN after having 666 tattooed onto her ankle. Watch the video at CNN

So are you ready to be a person etched with 666 tattoo. I don’t mind if you do so or not but I would also like to show you this video which has something for you from holy Bible.

Fish Splash For Your Skin In Shape...