Home Off Beat Joel Madden’s Tattoos too offensive for a British Airways flight! 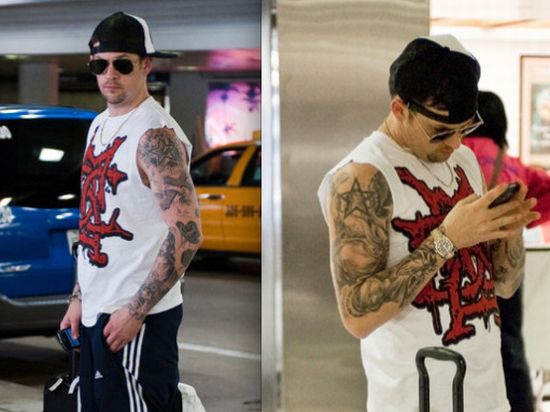 Joel Madden’s Tattoos too offensive for a British Airways flight!

It sounds really weird, but it did happen. Good Charlotte’s Joel Madden wasnât allowed to board a British airways flight from London to Lisbon by an employee, just because of the tattoos on his arms. And the irony was that he actually put a shirt on to cover up the tattoos because he didnât want to miss the flight in any case. After this weird incident, a representative from the airline saidâ¦

We don’t understand why the employee took it upon himself to enforce regulations that don’t exist.

On the other hand, Madden twittered and citedâ¦

I did end up covering my tats. Itâs not my style to cause a scene I just had a convo with the BA guy told him how it was discrimination.

I was embarrassed all the people were staring and laughing!
My tats aren’t offensive. …I haven’t felt this small since the first time I asked Nic out.

That’s the craziest story Iâve ever heard. It’s sad there is still such discrimination in this world

All of [Madden’s] tattoos are spiritual. Since when is expressing your love for God & family against what British Airways stands for?

Personally speaking, I find it really funny. May be that employee was on a high that he did such a weird thing.