Home Off Beat Eyeballs: The new place for tattoos 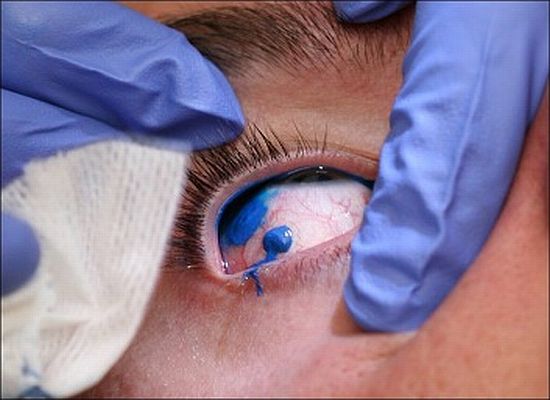 Wanna get a real funky tattoo done but scared of needles? Well, then here is a source of inspiration for all the tattoo buffs. Also, if you can not decide where to get the design on your body canvas, this Canadian national might give you an out-of-the-world idea. This Toronto man has got a tattoo done. Nothing unusual, except that he has got it on his eyeballs! Basically, he has got the whites of his eyes turned blue by getting the pigment injected under the top layer of the eye (conjunctiva), with the help of no less then 40 blue ink injections at a Canadian body modification convention. This is usually done in some kinds of eye problems only.

After an unsuccessful attempt with the traditional tattoo needle, instead of giving up the idea, he got it done with a syringe. Wierd though it seems, this is actually the medical art of corneal tattooing and is on its way to become a new type of âelective body modificationâ (read mutilation!). Now, thatâs to be called as âcreativity with a masochistic touchâ. That indeed leaves me amazed about how far people can go with tattooing, but also with a simple query; what if he gets bored with the colour blue?!