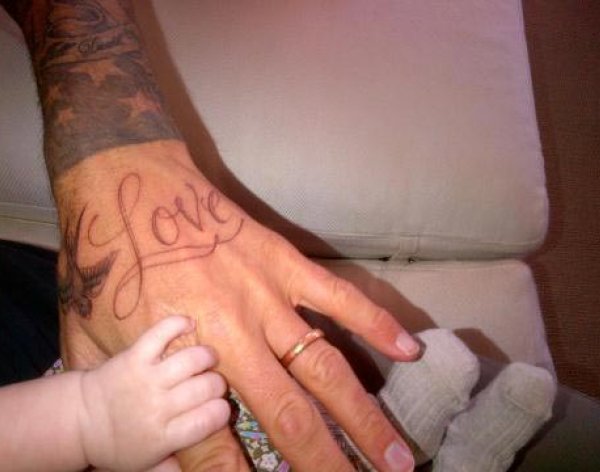 David Beckham, the famous footballer, has now added yet another tribute tattoo to Harper to his already existing vast tattoo collection last month. The brand new inking is a swirling inscription of the word âLoveâ. It has been etched on the back of his hand, alongside the design of a soaring swallow

This is not the first time he got himself inked as a dedication to his lovely daughter. He had got himself etched on his neck soon after his first daughter Harper was born. He got Harper’s name inked.

The legend has a cluster of tattoos etched over 2ft length surface of his right arm. The cherub design tattoos over his shoulders join numerous other tattoos on his right arm to make it look like one continuous piece of âartworkâ

On his upper right arm, there is a big tattoo of Jesus, carried by three cherubs placed aesthetically over his shoulders. David had his three sons Brooklyn, Romeo and Cruz in mind when he had thought of angelic cherubâs tattoos.

David Beckham had added a monster tattoo on his right arm on the day he bid farewell to Manchester United fans. That reflected his state of mind at that point of time and deep turmoil he was going through as he was moving to LA. The same time, he had gotten the words âPray for meâ tattooed on the inside of his right wrist. That tells us how he felt about being an English boy and having played for his country over the years and now to move to LA.

One major big tattoo on the right forearm is that of a giant angel sentinel. She is depicted holding a flame in her hand that makes it look like her face is illuminated from below. The wings are spread around Beckhamâs arm, which tactfully merge with the other existing tattoos.

David also has a tattoo of Knight Templar, symbolized by a cross. This is his dedication to the England team. He had asked the tattoo artist to etch the Knight Templar as he felt that the knights were the best-equipped and most dynamic fighting units of the Crusades and he felt the same way representing his team of knights.

David Beckham also flaunts a Hindi tattoo of wife Victoriaâs name on his left arm. Alongside are inked the words âUt Amem et Foveamâ which in English translate to âI love and cherishâ. He had also added a total of 10 roses linked around his arm as a tribute to his lady love and wife Victoria on their 10th wedding anniversary.

Among the other tattoos sported by David Beckham are the etched words âLets them hate (me) as long as they fear (me)â, âPerfectio in Spirituâ and roman numerals VII.