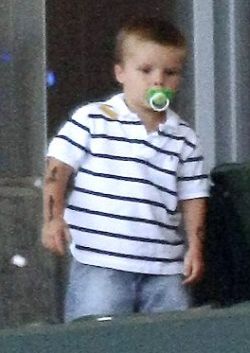 David Beckhamâs youngest son, Cruz, was recently spotted with tattoos on his arms. Though temporary ones, they reveal Cruzâs dad worship. He may be too young to imitate daddy on the turf but junior Beckham had no worries about imitating daddyâs tattoos. Beckham himself has 13 tattoos as tributes to his wife Victoria and kids Brooklyn, Romeo and Cruz. And now his son Cruz has followed him. 3-year-old Cruz stepped out with his arms covered with four tattoos. Though, it is difficult to read what the tattoos convey but one thing that I am sure of is that daddy dearest is Cruzâs idol.

Mario as militant: Ready for the fight!

The Vienna Tattoo Convention is back