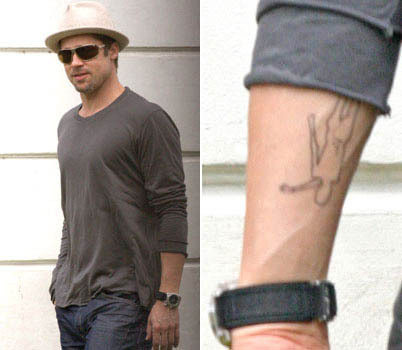 Recently, Brad Pitt is traced with a tat on his wrist. True significance of the tattoo can be revealed by Pitt’s own mouth, however for some it is Otzi – iceman – and for others it is his partner Angelina Jolie in character of Tomb Raider.

I bet this is Jolie, as I can’t find any reason he would ink iceman or it’s a jab at his former life, as the outline picture of Otzi is absolutely similar to his new tattoo. Sorry, even I am not able to take one stand.

In March, Pitt had tattooed his lower back with a Sanskrit Buddhist blessing meant to protect his adopted son Maddox. This tattoo is similar to the one Angelina has on her back.