Home Off Beat Bif Naked’s tattoos: In search of spirituality 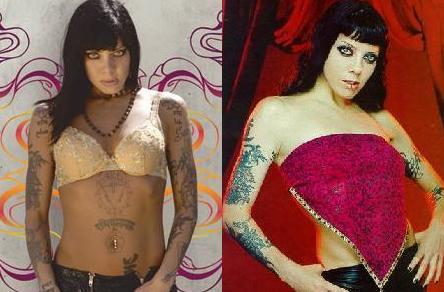 The ‘little patchwork girl’ is the most embracingly tattooed women in rock. The amazingly inked song like tattoos of the sexy rebel represents her own enigmatic memories.

As with music the woman is dedicated to her body art too. Her tattoos, covering her arms and torso, date back as far as nearly 20 years, revealing her search for spirituality.

“I got a tattoo when I was about 16, which was an Egyptian eye, just ’cause I really wanted a tattoo,” she says. “My best friend at the time, Jennifer, had a tattoo, and I thought she was the coolest girl in the universe, so I wanted a tattoo because my friend had one. So I got the Egyptian eye, because it was a powerful symbol, the all-seeing eye, the third eye, and I’ve always been a bit of a theology buff, being raised in the home that I was raised in, which was a deeply religious home, both Christian and Hindu.”

The hazel-gray eyed tattoo freak was polled by the viewers of Much Music the hottest female with tattoos.