Home Off Beat Betty Broadbent: The Most Photographed Tattooed Woman 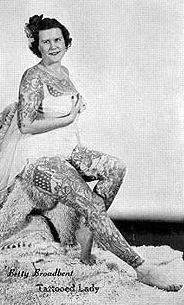 With 350 tattoos inking her body, Betty Broadbent was the most famous tattooed women of the century. Born in 1909, she was tattooed by Charlie Wagner, a tattooist from New York, who was one of the first to use the electric tattoo machine.

Her tattoos include the famous personalities of the time. Her neck was decorated with a likeness of Queen Victoria. It was her tattoos that made her conspicuous as skin art was not in vogue amongst women at that time. She was a part of the major circuses of the era. During her long 40 years of performing life Betty flaunted her tattoos in every significant American, Australian and New Zealand circus. The striking feature was her face which was not tattooed at all, thus adding brightness to her refreshing face when contrasted with her beautifully marked body. Her passion for body art inspired her to be a tattoo artist herself. In 1981 she became the first person to be honored by the Tattoo Hall of Fame.