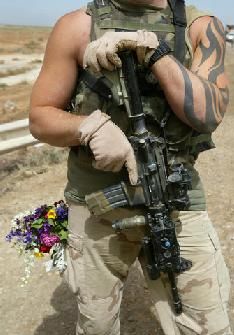 All dreams of Cory Davidson to join army are shattered due to the indelible ink which he nurtured for so many years. The army has turned him away because of his tattoos.

First it was the U.S. Coast Guard and now it’s the army. In an attempt to give army a more professional look, the rules of admittance have been tightened. Army regulations state “Tattoos or brands anywhere on the head, face and neck above the class A uniform collar are prohibited.”

Even after erasing his Japanese tattoo meaning ‘brothers’, Davidson is unable to enter the ‘band of brothers’. Now a congressional inquiry is stepping in. So, as per army, people with tattoos are not professionals and they are unfit to serve their country. How bizzare??

It’s killing and absurd. The Yanks have been flaunting body art since ages. I just can’t understand the present change in the mindset. Tattoo parlors are opened in prisons today. The army personals have to come out of the Pentagon to see and feel the force and passion behind body art and melt the tattoo conflict going in their minds. But if it’s a typical damn army ‘RULE’, it’s a rule, as permanent as the tattoos itself.