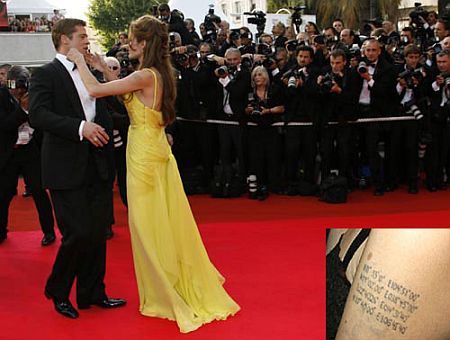 I wonder whether Jolie has hired a tattoo artist permanently at home? She doesn’t allow time to pass long and there we see her in new ink. Last, she showed letter ‘M’ on the palm of right hand – commemorating her late mother.

Her each tattoo signifies memories, which she never wants to forget and the ones she wants to forget are erased from her skin e.g. Billy Bob tattoo on her left arm. Unfortunately, after so much pain and expenditure, she could not delete Billy Bob completely from her skin and today you’ll see that her children have conquered over her bitter memories.

Yes! She has inked a new tattoo in the honor of her children and this tattoo resides on the same place where Billy Bob’s existed. This tattoo is not a mugshot rather it is a very different, which represents the very international map detailing where the four children, three of whom adopted, were born.

First line represents longitudinal and latitudinal location of Cambodia, the birthplace of Maddox.

Second line represents the longitude and latitude of Ethiopia, the birthplace of daughter Zahara.

Third line signifies the longitude and latitude of Namibia, the birthplace of her own daughter Shiloh.

Fourth and the last line symbolizes Vietnam the native land of Pax Thien.