Home Off Beat All in a tattoo’s name! 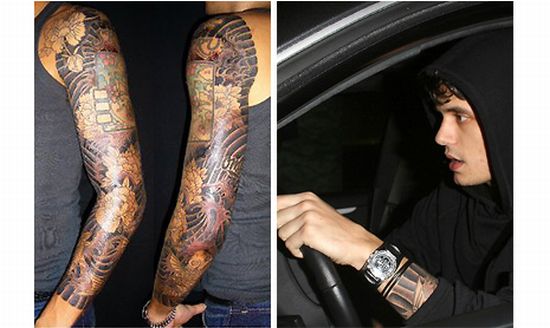 Gone are the days when tattoos were restricted to hardcore bikers. Now most of the celebs, rockstars and sportsperson have taken to tattoos and they love to display their tattooed bodies. As a matter of fact, tattoos have become a coded language and onlookers continue to ponder over the hidden message.

The latest to redefine tattooâs fad is singer, blogger and guitarist, John Mayer. He in fact has adorned almost half of his body with tattoos. Simply fascinating! A tattoo freak, Mayer has now covered his left arm with a sleeve tattoo that he gradually acquired in several years. It is believed that he got himself inked full sleeve while he was on a vacation in Japan. Besides other intricate floral designs the tattoos on his left shoulder reads âSRVâ (in honor of Stevie Ray Vaughan) and an ornate rectangle on his left bicep. The 30-year-old singer has also tattooed his birth year (77) on his chest and has a fish over his right shoulder. He even has one of his songsâ title âHomeâ inked on the back of his left arm.

All in a tattoo’s name! was last modified: July 31st, 2012 by Community Writer | Community.Drprem.com