Home Off Beat A Knife Tattoo for the best chef 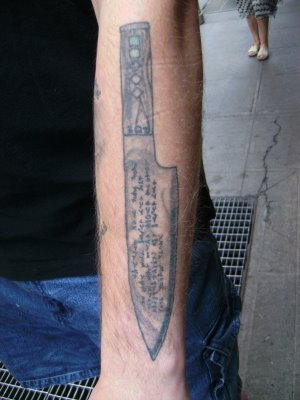 People ink weapon tattoos on their body because they love violent themes. But Chris is not one of them. His knife tattoo on the left arm is a symbol of his devotion and passion for his work. What else could have been the better tattoo for a sincere cook? The text on the knife has been written in Cherokee; belonging to the ancient ages. Though Chris himself can not read it, still he loves to have it for itâs the tongue of his father. The colorful shapes at the handle looks like jewels fitted on knife (Chris might have some other explanation for this!). Craig Foster is the artist behind this awesome tattoo that looks as lively as the much-used old knife of the chefâs kitchen.

A Knife Tattoo for the best chef was last modified: July 31st, 2012 by Community Writer | Community.Drprem.com

Tattoos and biking – the real cocktail