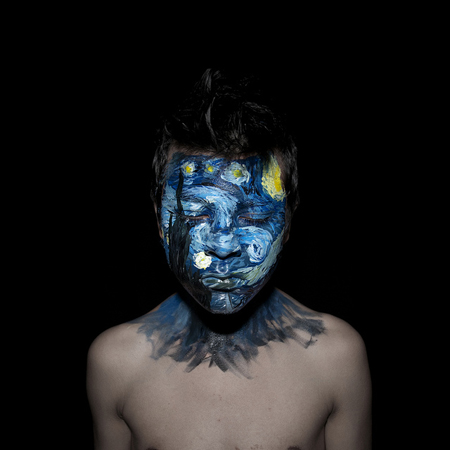 Famous paintings around the world have always inspired artists. So much so that it has now become an obsession with one of the artists, Andy Alcala, a student of the University of lowa, who recently turned his face into a replica of all famous paintings. This amazingly talented student has transformed his own face into ten of the most famous paintings around the globe. The term ‘face value’ definitely held a lot of value at this exhibition which showcased the fantastic displays on the face of the ten most amazing paintings by ever famous artists of the world. Let us now take you through the creative journey of the ‘Face Artist’:

Jasper Johns was famous for his cross hatches and usage of iconography like alphabets and symbols. His most famous work of art was ‘The Flag’ which was was later turned into silk screening and other paint materials. His work of art has been effectively portrayed by Andy Alcala which truly shows that the painting exists.

Kenneth Noland played with various colors and shapes and was an abstract artist, well known in his times. Andy has most effectively portrayed Noland’s work on his face, seeing that it was the most difficult task to do as he had to paint straight lines on his face with his eyes closed. This was a challenging attempt in which Andy succeeded.

This famous painting by Renne Magritte was supposed to be a self portrayed where the green apple was hiding the face behind it, but still visible if one looked close enough, giving a message to the onlookers that states that people are always curious to see things that are hidden but miss out on what lies in front of them. This self-portrayed has been replicated by Andy in his own style which is unique and commendable. He has painted the green apple on his face to show the hidden part in the actual picture.

This was a simple and a very famous painting of the artists who used enlarged canvases to connect to the onlookers. A rectangle of colours, this painting became the ever famous classics. Andy has so well represented this on his face that people actually broke down in front of him stating that he has so aptly and intricately created the original artists vision.

The unstretched canvas was stretched on the wall and to the floor to achieve the hard result of this painting. Jackson was a kind of painter who went beyond the canvas, filling up the hard surfaces of the floor and walls with his work of art. For Andy it was the most difficult picture to paint as well as to dry. Andy was so inspired by the artists impression that he too lay down on the floor just like the original artist, in order to paint his face with this replica.

Banksy works usually on walls of houses and his work of art is immensely appreciated and sold lavishly, being popular among art lovers. This beautiful art of a Girl with Balloon was beautifully recreated by Andy on his face and looked divine with white and red. The painting of the girl on the face catches your attention as it has been so intricately done.

This was extremely famous in the artistic world of the 60’s. Andy Warhol loved soup and painted soup cans with his simple designs. Art does not always need to be complicated. This has been so intricately and beautifully created by Alcala on his face, especially the sign with the detailing makes for a beautiful effect and touch of expertise.

Who would ever have thought of replicating one of Van Gogh’s best? This was one of his best works which was created while looking outside his room in an asylum. So beautifully have the colours taken shape on Andy’s face that it seems to be the actual copy of the original Van Gogh. Too good for a face artist to have created this impression.

The artists emotions still come alive with this painting of terror and terrified people who have seen the destruction of nature. The depth of this painting lies in its emotions and this was very well understood by Andy who created this emotion on his face with the variety of red’s and orange colours and the hues of blues to show the effect of the painting.

Neoplasticism was the forte of Mondrian who used grids on white background with the three primary colors. Composition II was the first and larger use of bright colors in paintings by Mondrian. Effectively used on the face by Andy, the past has truly come alive as Andy’s face art.

Think before you ink

Things to keep in mind while getting...

Things to consider before you get inked

Tattoos guys should never get

Top mistakes during tattoo after care

All about face painting

Tattoo designs that are a nightmare to...

Tattoo tips to know for maintaining your...

Getting great tattoos for great prices

Can anyone suggest some quotes for tattoos...

Are there any side effects of tattoo...

Tattoo ideas that are inspired from Hollywood

Want to learn about nose piercing ?

Would anyone suggest me some tattoos that...

What are the diiferent types of piercing...

Worst tattooing areas on your body

5 Effective ways to remove a henna...

How painful is a septum piercing?

10 Facts to know about face painting

Areas safest to get inked on

What is the eunuch archive all about?