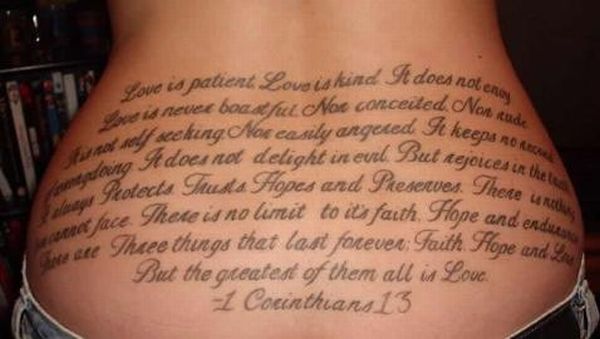 Great masters of art have always felt proud of their artistic creations or masterpieces. There are numerous such masterpieces all over the world. Some of the most awe-inspiring works of greatest artists in the world include the beautiful and smiling Monalisa, Picture Michelangelo looking up to the inspiring ceiling of Sistine Chapel and many more. Today, you can find different kinds of artists famous in their own art forms. Some of them are known for their best works while others are popular for their worst pieces of art. Given below are 10 worst rock tattoos ever. As you look through the works, you may wonder what ran through the minds of the artists while working on them.

When you look at this particular tattoo, you may wonder why on earth it is called as Axl Rose. It is very hard to see the context of the image too because he is surrounded by a Viking dress and a Cauliflower Monster. Axl Rose sports a magician moustache and has a chin that disappears from one side of his face. One look at this tattoo can tell you that this is a very improper attempt of Guns ‘N’ Roses. However, it looks much better than the braids of Raggedy Ann.

Take a look at the embarrassing tattoo; it will make you feel awful when you go through the large loathsome lyrics from the ‘Famous Last Words.’ It is the second single from My Chemical Romance released in 2006 called the âThe Black Parade.â How can anyone think of inking the lyrics in 2011? Think before branding your body with a brand name. You may regret doing it after some time.

After the death of the legendary Damageplan/Pantera guitarist popularly known as ‘Dimebag,’ hundreds of people began to pay tribute to him by making tattoos. Most of the tattoos were beautifully designed and crafted. But if you look at the one given here, it may not belong to the aforementioned group. This horrible tattoo sports a goatee and googly eyes. The image itself seems to look like the tongue of Gene Simmons! It is one of the worst tattoos ever made on earth.

The gentleman has tried to etch the names of metal bands on his leg such as Motley Crue, Ratt, Poison and Cindrella. Looks like he is ready to hit the beach for the Sunset Strip sporting a 6-inch heels and a blonde wig. He likes to flaunt his passion for the artists and this is obvious from the fact that he has used multicolor highlighters to display his love for them.

Looks like the artists are trying to show off their ability to portrait the worst side of someone. Take a look at this tattoo for proving the statement. To the left is the drummer of Green Day, Tre Cool that has the least resemblance to him. Move to the right and you will find Mike Dirnt, the bassist, better looking like none other than Tyler Durden from the ‘Fight club.’ Look up and you will see Billie Joe trying his best to impress. There is an ideal display of irony with the images accompanied by the rendition of the album cover of ‘Dookie.’

This intentionally funny looking tattoo can be called nothing else but bad. It has been modeled after the classic album Metallica’s ‘Kill ’em All.’ The person hit the extreme after realizing that Grill rhymes with kill. The play with words has helped him to immortalize the theme in a dreadful way. Along with using the trademark logo of Metallica, the tattoo sports a steak and two cross spatulas in the logo matching to his newly found rhyming words ‘Grill ’em All.’

None of the Slayer fans would tolerate this tattoo. Most of them are well known for their religious dedication. They even use knives to carve the name on their skin. But no one would ever think of actually living the rest of their life with a horribly done Slayer tattoo as this one. Look at the ‘S’ which has been done backwards, no one knows why, and you will never find this on any of Slayer’s logo. Their logo has never looked like a terrible graffiti either.

This tattoo proves that someone can indeed make a tattoo look like a gelatin blob. The tattoo has James Hetfield sporting a funny look as if he got kicked on his ass, Kirk Hammett, the lead guitarist looking like the Frankenstein monster. Cliff Burton resembles Jason Newsted. This is one of the most worstly done tattoos ever.

The tattoo contains numerous words that are nothing but popular band names. Another thing about this tattoo is that it has been quite famous all over the internet. The portrait in the center is of Randy Ross, making it more horrible. The person has dubbed his back as ‘The House of Hair.’ Perhaps it would be more suitable to call it ‘The House of Pain.’

A nice face tattoo is meant for enhancing glamour and class. But tattoos like this can make you regret for the rest of your life. In place of some killer sideburns, this person has decided to sport the earth crisis tattoo. The Frontman of Earth Crisis commented on this particular tattoo in an interview. He felt that it displayed the pure dedication of the person to have this tattoo done in this way on his face.

Where can I get a wolf tattoo...

Can you please help me with some...